Komodo is one of the most famous National Parks in the world.  Most memorable for me are the incredible colours of the coral reef and the currents!  If you like a bit of adventure or consider yourself a thrill seeker, then the Komodo National Park is definitely for you.

I have been to Komodo three times on three different boats and each was a completely different experience.  There is an operator for everyone, from luxury live-aboards to smaller more personal boats.  Choose from cruises that look for more relaxed diving, pretty reefs and of course awe-inspiring manta interactions or trips that seek the strongest currents where massive schools of fish can be seen, predators are abundant and every moment is a heart-in-the-mouth adrenaline rush!  Komodo has it all. 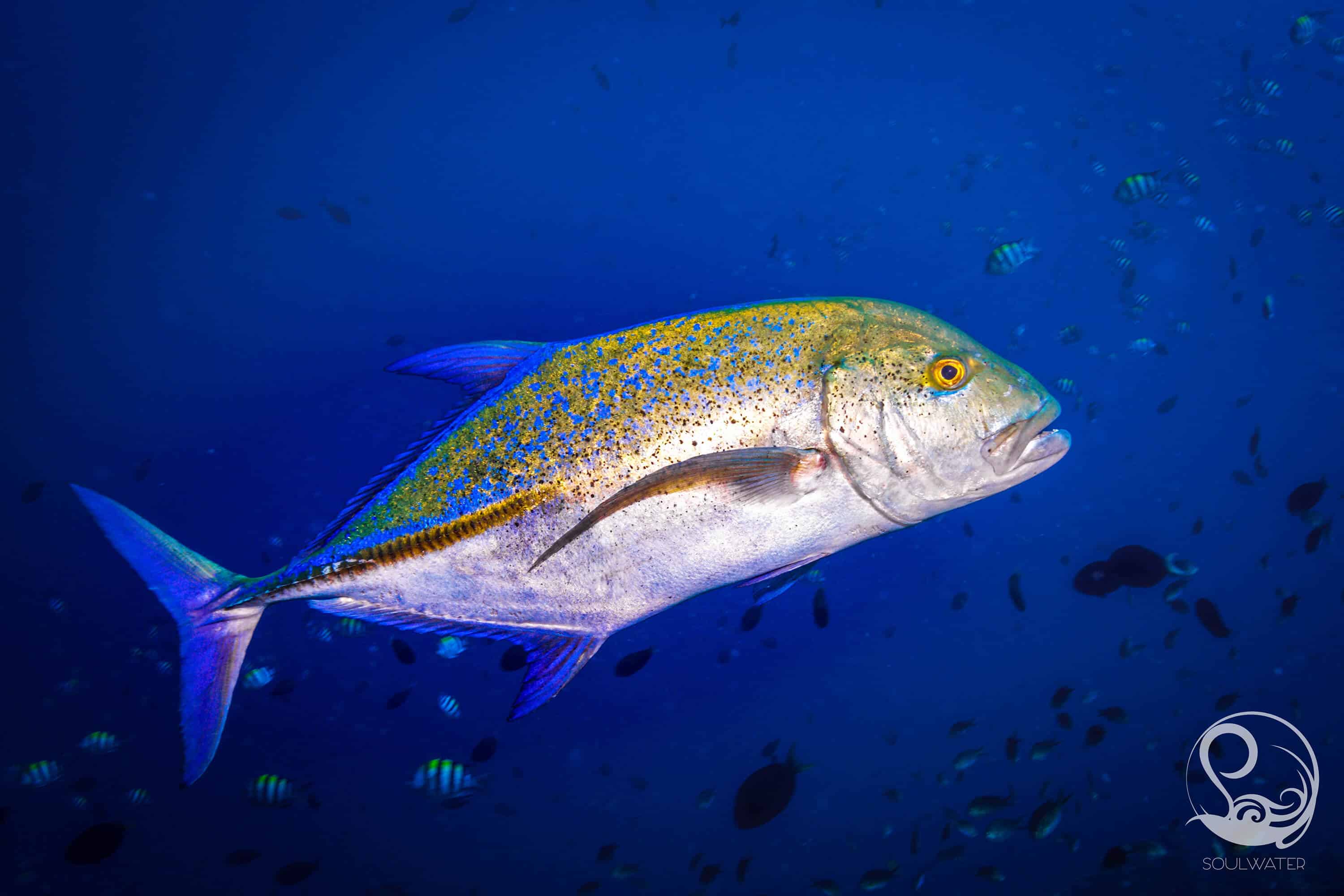 Batu Bolong (Hole Rock) is one of the most famous sites in Komodo.  It is a sharp peak which breaks the surface and plunges steeply to the depths below.  When diving on the lee side of the rock it is populated by a myriad of pretty reef fish, thousands of little red anthias surging and swelling on the stunning colourful reef.  Several species of angel fish, blue trevally, sea snakes, the occasional white tip shark, barracuda, and sometimes a turtle meandering along the reef are typical residents.  Batu Bolong also boasts a huge variety of macro life, with beautiful nudibranchs and tiny crabs and shrimp dotted across the reef. The visibility is often clear and the water blue, making the vibrant colours of the reef pop.  It is a visual feast.

For the more adventurous there is a short but vertical shaft (the hole it is named for) which starts very shallow at the top of the reef and then spits you out onto the steep slope below.  The really brave of heart who drop “in the split” when the current is running can be rewarded with huge schools of jacks, unicorn fish, fusiliers and snapper, and hunting grey reef sharks, giant trevallies and great barracuda.  But be warned!  Batu Bolong is a dive you must take seriously.  If you misjudge the current you might find yourself spat off the reef, or more terrifying, caught in a down current which can spin you down to 50m or more.  A good guide with experience and intimate knowledge of the reef and the currents is essential. And if she says move, you move!  Don’t try this alone!

Another famous dive site is Karang Makasar (which literally means coral reef) where the main attraction is the chance to see mantas.  This is a long wide shallow (10m depth or less) undulating rubble channel, and a series of coral “bommies” or rocks, which serve as cleaning stations for manta rays.

Mantas spend up to 5 hours a day being cleaned, and this grooming process is important to remove parasites from their skin which can make them sick.  A cleaning station is basically a coral mound where small fish such as cleaner wrasse and butterfly fish live, waiting for their manta customers.  This symbiotic relationship gives the cleaner fish a free dinner, delivered straight to their door, and keeps the mantas healthy and feeling fresh and ready to face the day!

Mantas prefer to visit the cleaning stations when the current is running, so you may find you have to hold on to a rock on the bottom to steady yourself to watch the show, but otherwise the dive is an easy drift.  Although this is not a colourful coral reef, even if you are not lucky to see mantas there is plenty of other life.  I have seen bamboo sharks and bull rays there, as well as some of the tiniest nudibranchs I have ever seen.  Nearly microscopic, they are certainly too small for even my macro lens.  If you have a super-macro diopter perhaps you can capture something incredible which is almost impossible to see with the naked eye.

At certain times of year this channel has also been part of a migration pathway and several hundred mantas have been seen passing there at a time! 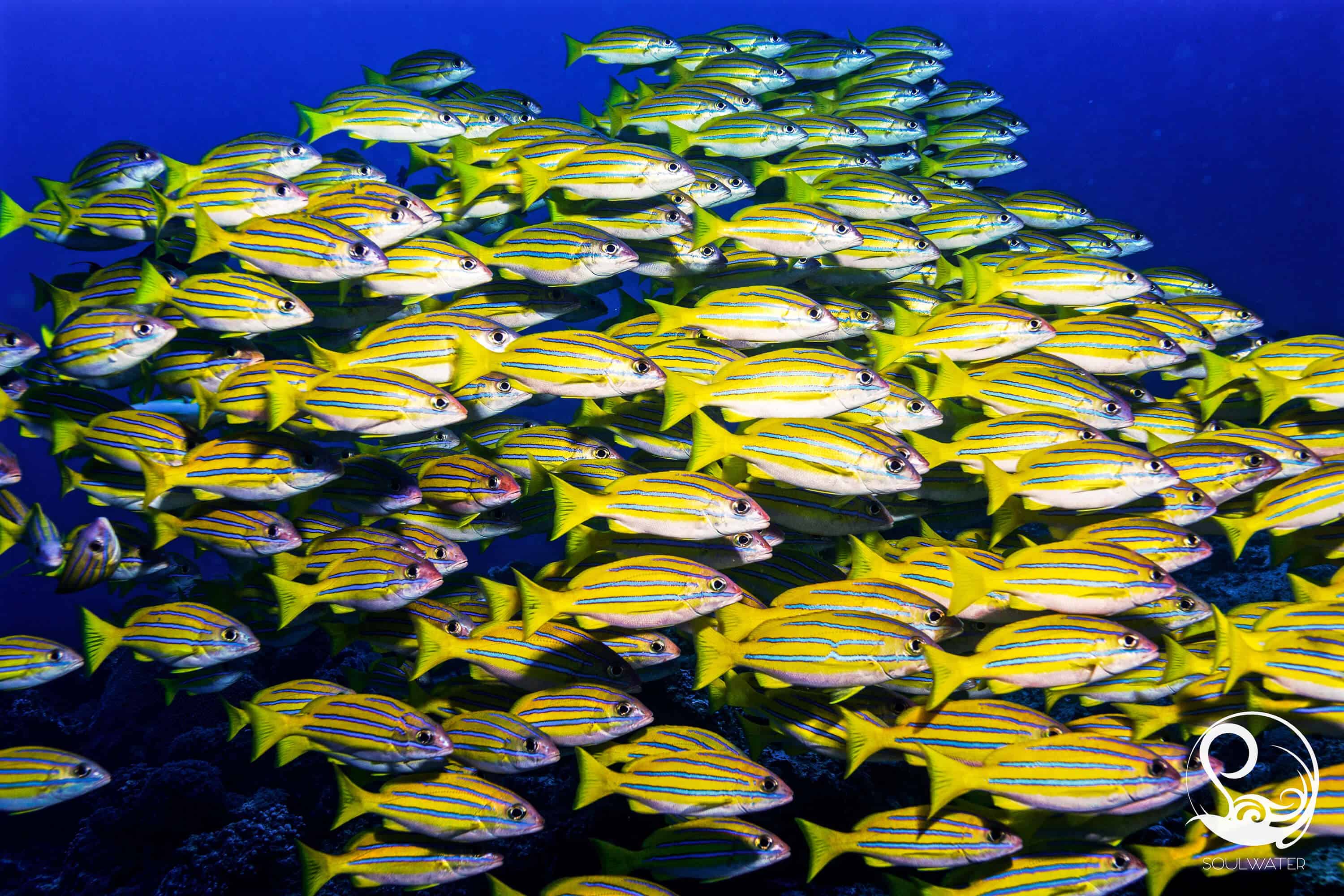 Two of the most famous dives in Komodo, both offering similar types of topography and life, are Crystal Bommie and Castle Rock.  They are underwater sea mounts which come right up to the surface, and as many sites in Komodo have a “split” point where the current hits the reef head-on and then divides around it in both directions.  The split is where the current is the strongest and the fish congregate to feast on the tiny microscopic creatures that are brought up to the shallows in the upwelling water column.

This is the perfect place to observe the cycle of life, where every part of the food chain can be seen. Huge schools of fish feed on the microscopic plankton or tiny shrimp and fish, and the hunters of the reef are waiting for their moment to attack and make a meal of an unlucky snapper, unicorn fish or fusilier.  The fast moving giant trevallies, which are killing machines built purely for attack, dive bomb the thousands of fusiliers gathered on the reef.  Barracuda and sharks patrol the outskirts of the fray waiting patiently for their opportunity to strike. The sun flickers from the shining fish scales in the early morning light when there is the most action. This is the perfect time to witness this incredible symphony of nature.

The Cauldron:  AKA The Shot Gun!

The Cauldron is a deceptive dive. It starts as a very gentle drift down a sandy channel populated with pretty glass-fish covered bommies where you can look for small creatures such as peacefully dwelling frog fish and leaf scorpion fish. As you drop into the bowl of the cauldron itself you might feel a little of the pull of the current, but it is still relatively mild as you cruise around the edge of this beautiful natural amphitheatre.  In one nook in the reef are some resident giant trevally which seem just to be chilling in their little corner of the world.  So far a very tranquil and pretty dive.

But be prepared as you reach the exit point at the other side of the basin. The current hits you like a horizontal waterfall.  This is the shot gun!  Deflate your BCD and stay low and you should be able to grab on to a rock or hook in, because this is more than just a joy ride.  The current here brings bigger marine life and you might be lucky to see manta rays, or perhaps something even bigger.

Don’t dismiss the Cauldron as a boring chill-out dive.  You never know what you’re gonna get! 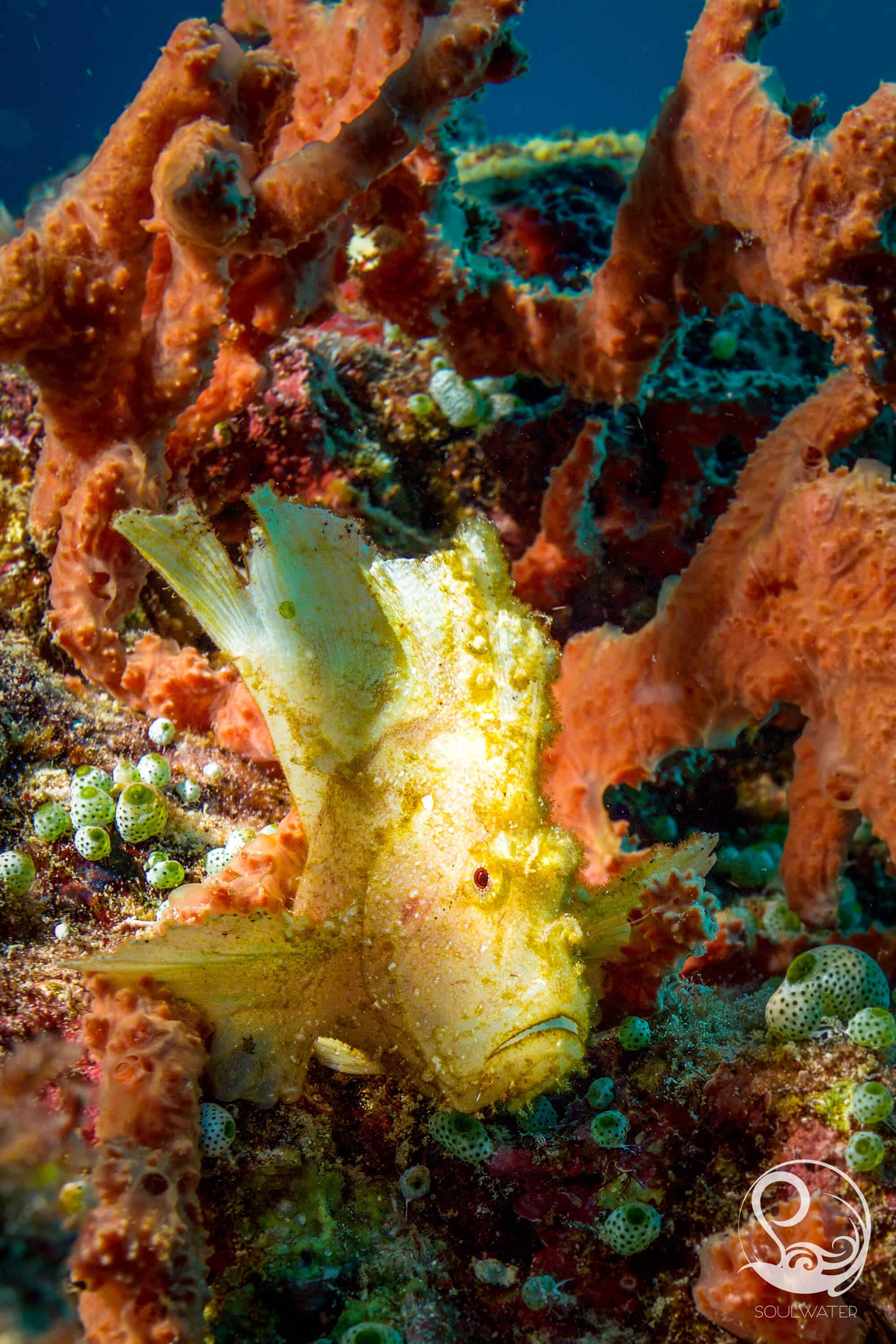 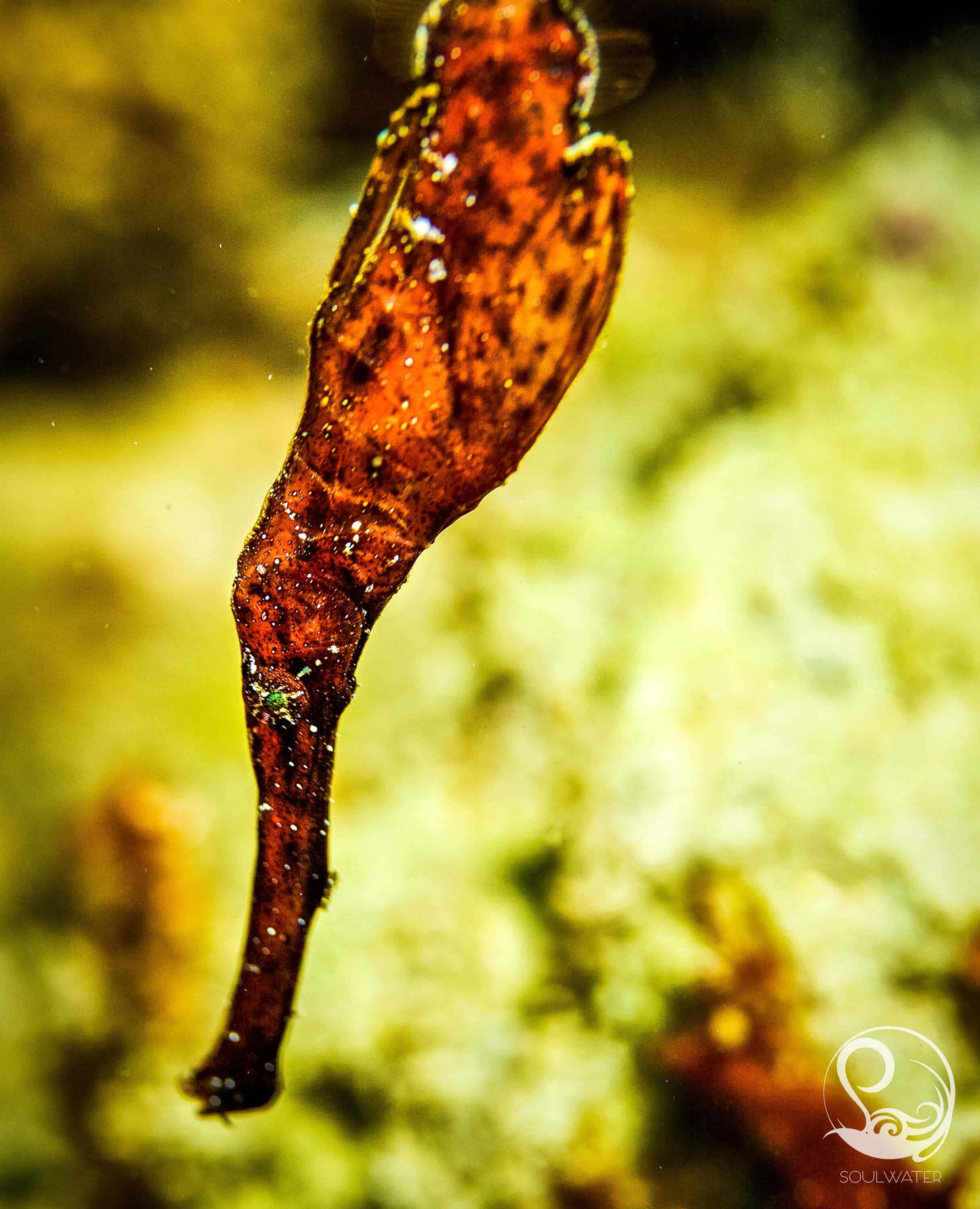 If you are a lover of all things small and beautiful, and of the weird and wonderful, Wainilu is definitely a dive you should check out.  It is quite different to the typical stunning reefs teeming with fish life and constantly hungry predators for which Komodo is famous.  This wonderful little muck dive can be dived during the day or at night when you can see an even stranger array of creatures.

Here you can find ornate ghost pipe fish in many colours, robust ghost pipe fish, wonderpus, mimic octopus, flamboyant cuttlefish, strange crabs, commensal shrimp, squat anemone shrimp (also known as sexy shrimp as they waggle their tick-tock arses at the sky), tiny juvenile box fish, nudibranchs, stick pipe fish (which I find super odd and for some reason very difficult to film despite their slow moving meandering across the sandy bottom), and much much more.

Komodo of course is also famous for topside life as well as underwater!  Komodo dragons are the endemic residents who have become the mascots of the Komodo National Park.  They are publicised as terrifying prehistoric creatures, the last link to the dinosaurs, who have been known to kill and eat humans as well as any other unlucky animal on which they can get their horrifying grip.  One infamous tale of tourists left behind by their dive boat swimming ashore to Komodo Island, ends with them being attacked by dragons.  Now that’s a seriously bad day at the office!

When I asked my guide what to do if a dragon chased me, he replied “run faster than the dragon”.  Logical I suppose!  They can run incredibly fast, up to 40km per hour, but only for short bursts.  You only need to be able to run faster than the person behind you.

There are many myths about the dragons and the story that their mouth is simply full of bacteria is misleading. They make up for their inability to chase prey for long distances with a poisonous bite, possessing poison glands similar to a snake. They will chase their victim just enough to get a bite. Then they track their prey, often for days, until it finally succumbs to the poison and they can enjoy their feast at leisure.

In fact, they spend most of their time lying around warming their cold blood in the sun and only eat about once a month.  The rangers can be seen at the park sweeping their grounds less than a metre from a snoozing dragon.  Clearly a well fed dragon is a happy dragon, and only to be feared when they are hungry! 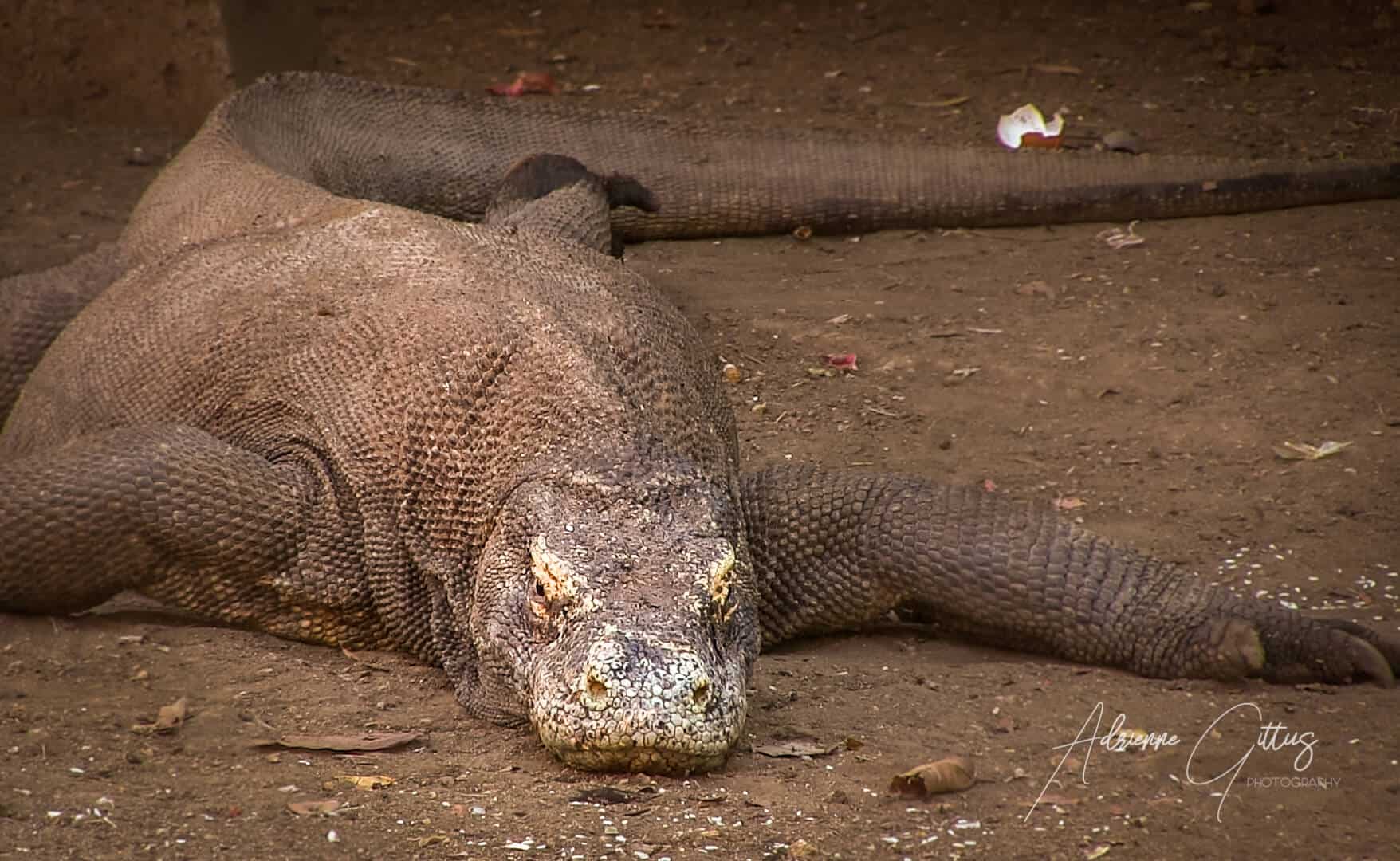 A little bit of Paradise

So having heard the extreme side of the Komodo National Park, don’t you want to sign up for the adventure?  Even if speed is not your thing, Komodo has a lot to offer.  There is plenty for both the adrenaline junkies and for those who prefer gentle dives with incredible colours and stunning natural beauty.  This should definitely be a bucket list dive location whether you like to amble slowly over pristine reefs, or if sideways bubbles and being in the midst of the hunt are your thing!