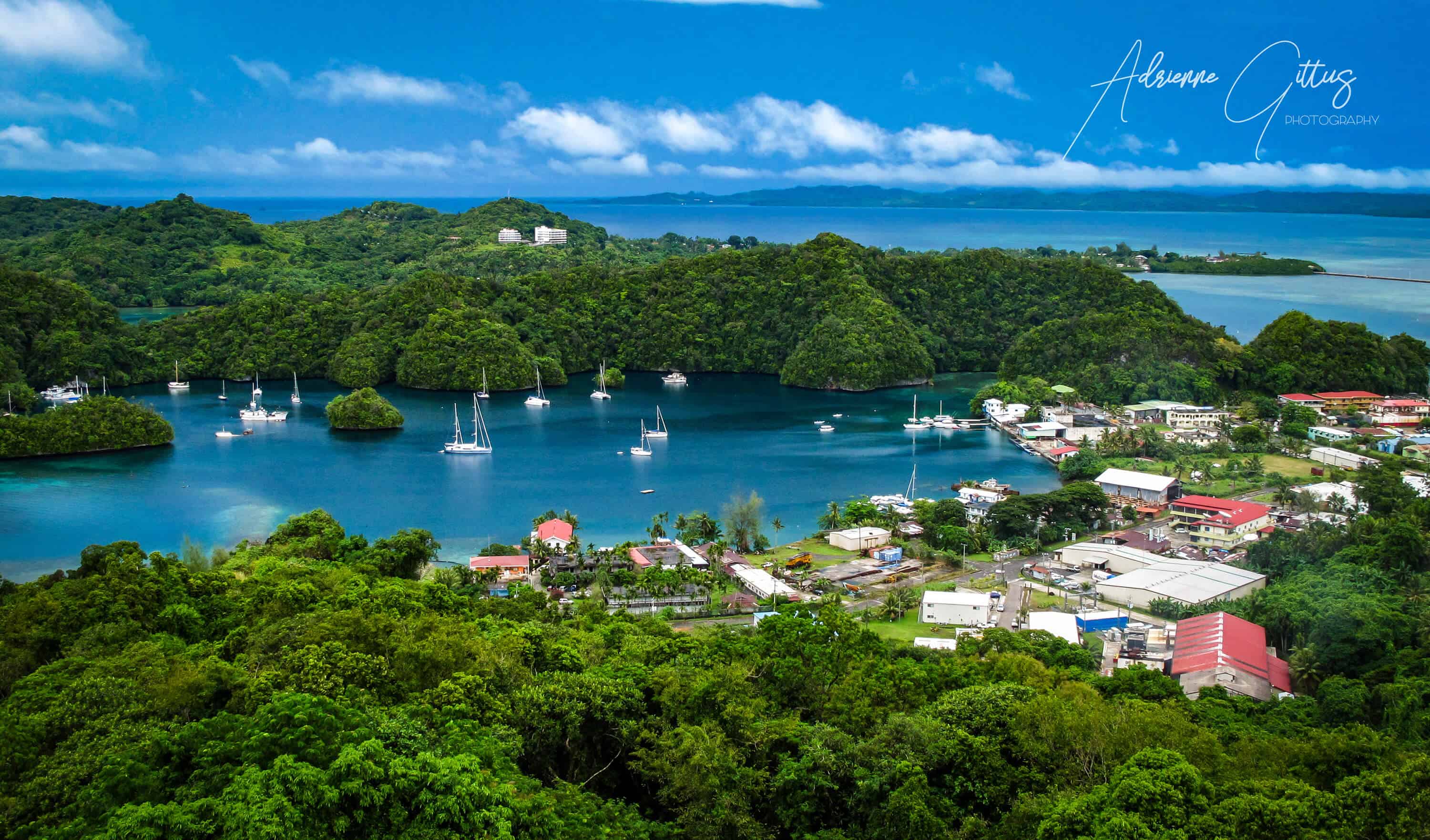 One of the most common questions I am asked is “what is your favourite place to dive?”  That is a very difficult question to answer as although I have dived all over the world, I certainly haven’t dived everywhere and there is a long list of places I would still like to go.  This series of blogs explores my top 5 dive destinations. And as for the places I haven’t been yet, I am also going to add my wish list.

Palau has to be one of the most famous dive destinations in the world, and in my experience deservedly so.  It is definitely in my top three.  I spent a year and a half there, and despite my personal philosophy never to repeat the past, it is one of the few places I would go back to.

Firstly, 80% of the country is a marine park, and the government is acutely aware of how precious and important their marine resources are to their economy, which is greatly dependent on the tourism it creates.  With a very small population of just over 20,000, tourism is the second biggest money earner in Palau, only after banking, for which it is also famous internationally.  Consequently, they take very good care of their ocean resources.

Palau’s diving is famous for large numbers and varieties of marine life, specifically for sharks, turtles, huge schools of fish, spawning aggregations, spectacular wall diving and strong currents.  The visibility is generally good there most of the year, with 40 or 50m visibility possible in the high season between October and March.  The notable exception is the milky plankton-filled waters which attract manta rays in large numbers to feed, be cleaned and mate.

It is also known for its historic wrecks, with an entire Japanese fleet being sunk in March of 1944 by three American task force raid carriers known as “Task Force 58” in operation “Desecrate One”.  Although not all of these are in divable locations, many are able to be reached as recreational dive sites, and several also make great technical dives, allowing for extensive penetration. 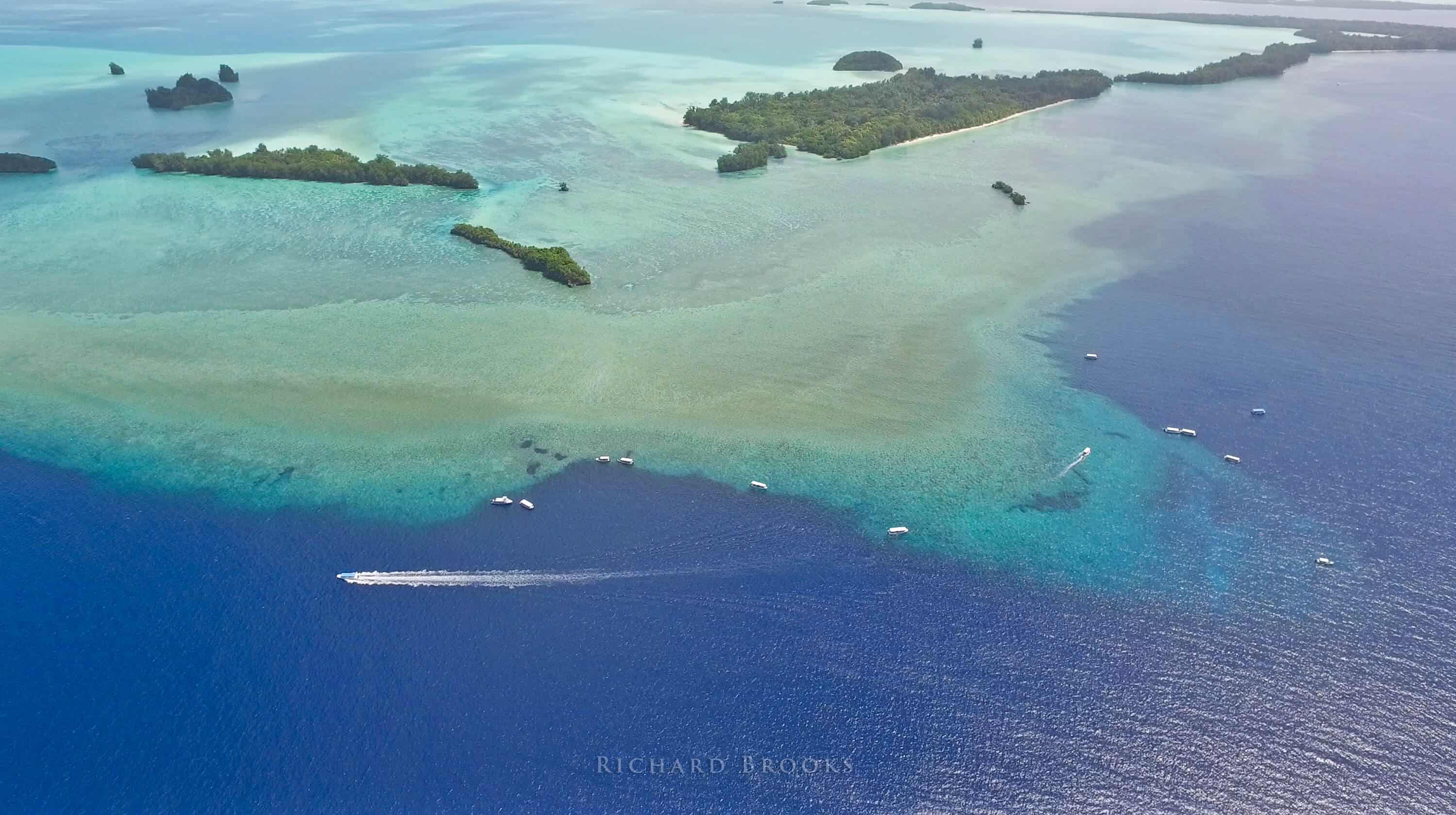 Blue Corner from the air

Probably the most famous dive site in Palau is Blue Corner.  The top of the reef is shallow enough, and the visibility usually clear enough, that it makes a dramatic image from above, which soon makes it obvious how it was named.  A sharply pointed elbow-shaped reef with beautiful vertical walls, it can be approached from either side, but an experienced guide is essential who can read the currents to make the most of the dive site, or in strong conditions, even to dive it at all!  Blue Corner can be home to some of the most impressive marine life in Palau, but also can offer some of the strongest currents, which can change very rapidly.

It is home to large resident schools of big-eyed trevally and white mouth jacks, which hang in the current picking off nutrients from the water.  Under strong conditions it is best dived with a reef hook and it is a thrilling ride to drift down the wall and then onto the plateau where you hook in and hang out effortlessly as if you were flying.  Grey reef sharks in large numbers cruise up and down the wall in front of the hooked-in divers, to allow oxygenated water to flow over their gills, and come surprisingly close.  I will never forget the first time I dived here when a grey reef shark repeatedly passed inches from my face, eyeballing me every time, gradually getting closer and closer!  My heart was nearly leaping out of my chest!

Strong currents attract big schools of fish and pelagic marine life, and as well as grey reef sharks and jacks, white tip reef sharks, barracuda, bumpheads, turtles, and other schooling fish are also abundant, eagle rays and napoleon wrasse are not uncommon, and there have occasionally been sightings of bigger sharks such as hammerheads, silvertips, and tigers.  I even once for a fleeting moment was passed while drifting quietly on my safety stop in the blue by a pod of dolphins, which went past like bullets, and left myself and my buddy gesticulating to each other to check if what we had seen was real or our imagination.  “Did you see that?!!”

German Channel is most famous for its manta rays.  When the tide turns and starts coming in through the channel, and the water becomes milky with plankton, large schools of jacks, snapper and barracuda gather in the mouth of the channel, and are joined by training and barrel-rolling mantas using their mandibles to guide the plankton into their wide open mouths.  It is a very impressive sight indeed and I remember one dive in particular, the final dive of a trip, where at least 10 mantas shared the site with us for over 90 minutes.  They were still feeding and frolicking when we were forced to leave them and return to our own world with its limitations of gravity. 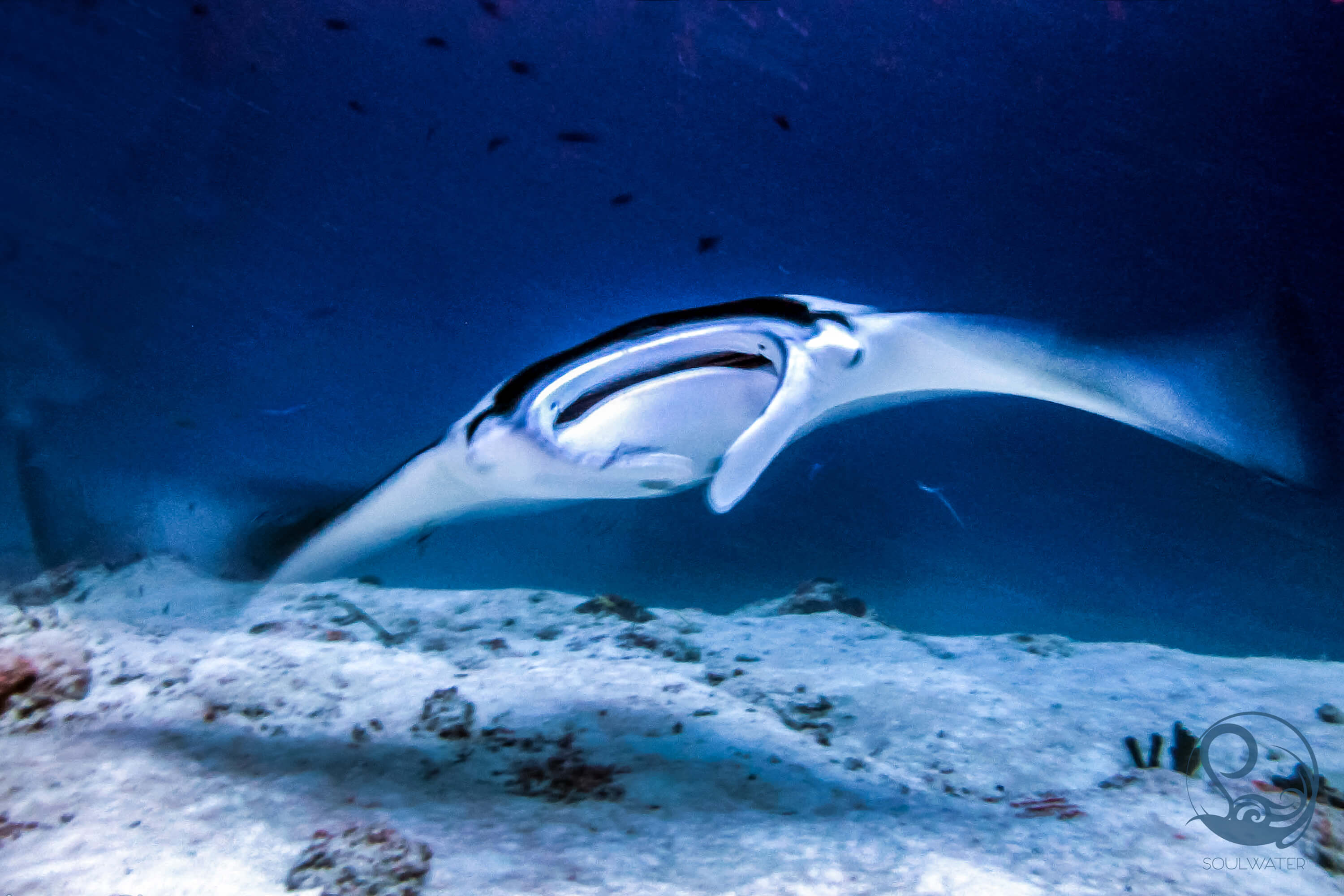 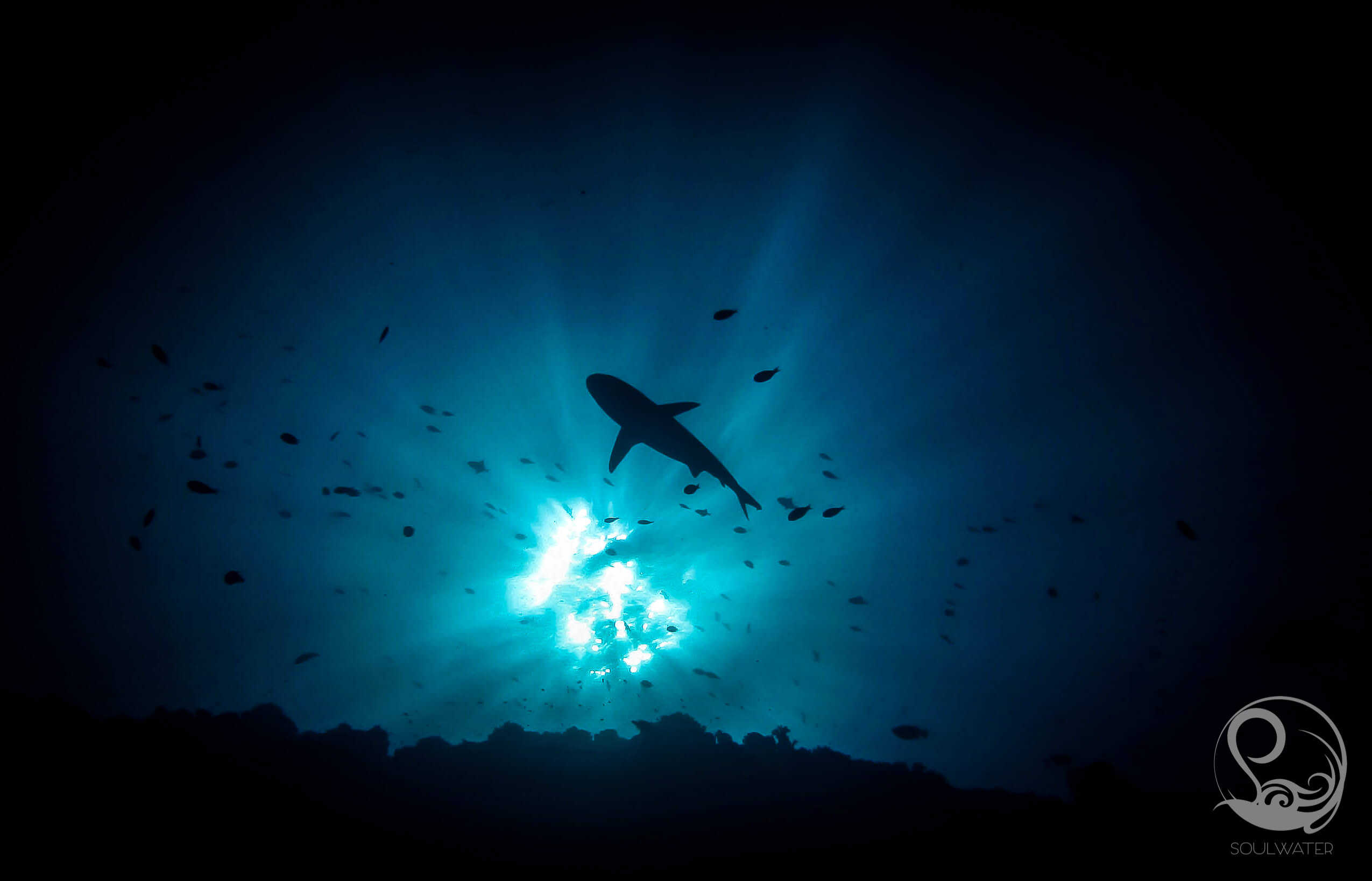 Ulong channel was one of my favourite dives while I was living in Palau.  The beautiful coral gardens at the beginning of the dive boast tabletop corals piled atop more tabletop corals and boulder corals, home to a myriad of pretty reef fish.  Large schools of scad, big eyed jacks and bumphead wrasse were often joined by feeding golden trevallies and large numbers of sharks.

There is a fine art in judging when to unhook, depending on the strength of the current.  If you time it just right you are treated to a rip-roaring roller-coaster ride down the channel, which is a sandy funnel with sides made of coral.  At one point there is a perfect patch of cabbage coral more than 10m high and 50m long, filled with soldier fish who hide there making little “condominium” homes.  During the mating season of trigger fish, the channel is filled with their nests which adds to the difficulty factor, and you bounce from one to another as if in a pinball machine, trying to avoid their attack.  It certainly makes life interesting!

Towards the back of the channel if you have timed it right, the current will shoot you over the top of the reef to land in a protected cul-de-sac, where a pair of huge purple giant clams have lain side by side for centuries undisturbed.  No-one seems to know how old they might be.  They have to be the biggest I have ever seen and their shells are covered with purple soft corals decorating them like jewels.

Peleliu Island in the south of Palau is infamous for a ferocious battle in World War II between the Japanese and American forces.  To this day there are still a large number of descendants of Japanese and Palauan unions in this part of Palau, and remnants of the battle such as tunnels and decaying heavy artillery still remain on the swampy island.

Underwater it is known for the notorious currents at Peleliu Corner, where the Atlantic and Pacific oceans meet, and when the current is running, definitely one of the most difficult and exciting dives I have ever done.

If you dive here as dawn is breaking around the full moon, and time it just right, you can be lucky enough to experience one of the most dramatic dives in the world.  This is when the red snapper or sea bream aggregate in their thousands to spawn.  These aggregations attract the sharks.  Big sharks!  Bull sharks and Oceanic Blacktips 3m or more in length scare away the usually resident Grey Reefs as they arrive in significant numbers to feed on the smorgasbord of 2,000 – 3,000 fish! 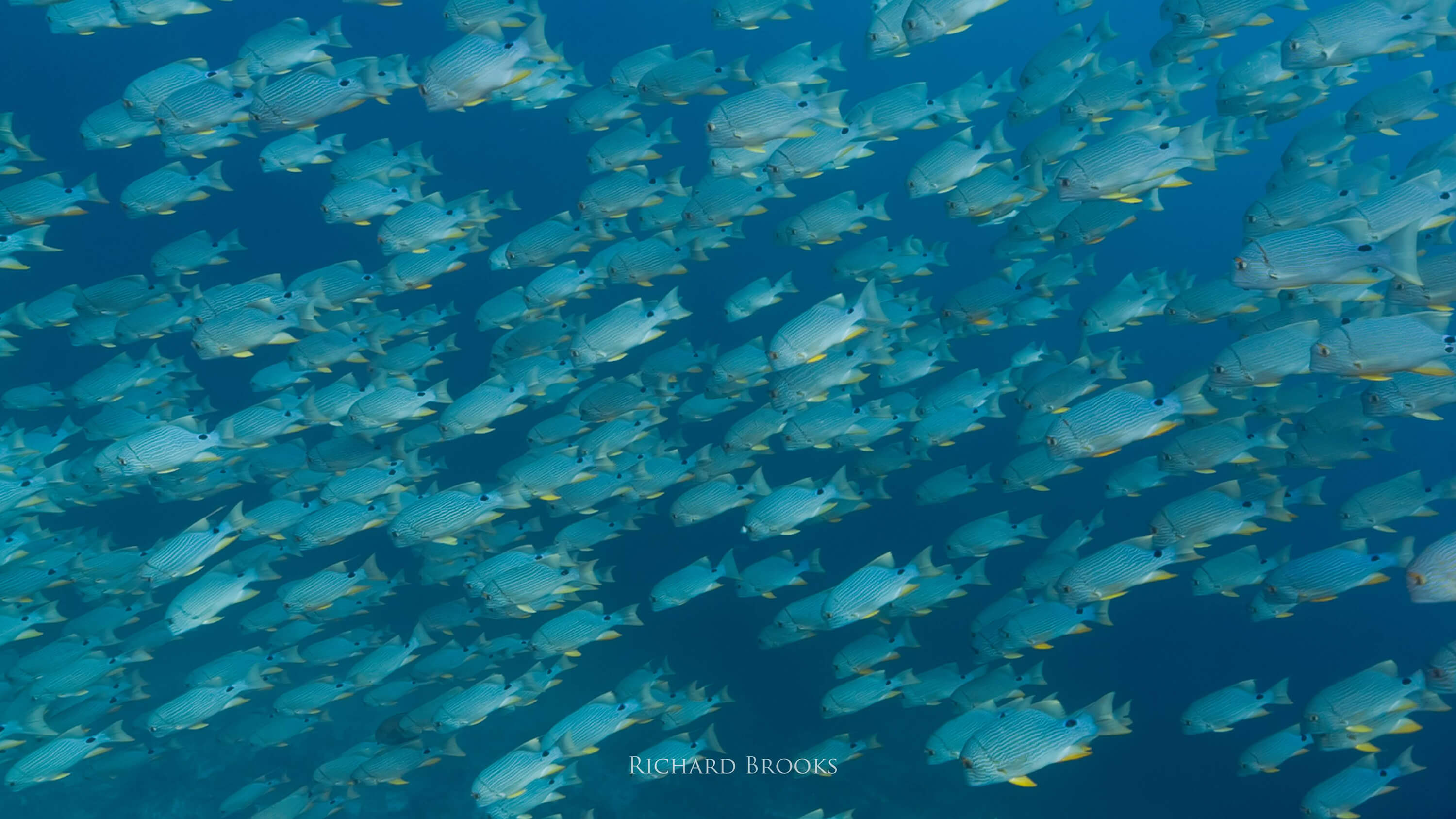 On one dive there, I found myself in the middle of the tornado of snapper, so many and so densely packed that they blocked out the light from the low sun, and the footage on my camera may as well have been taken in a completely black room.  As the school passed over me and the light rapidly disappeared and all I could see and feel were the bodies of fish boiling and jostling around me, I thought “where are the sharks?”  This has to be one of the most memorable moments of my dive career, and I am gutted that somehow I have lost this little snippet of video, grainy poor quality footage but evidence of one of the most exhilarating dives of my life.  Later in the same dive I turned my head when I heard the shout of my buddy, to see a 3m bull shark headed straight towards me, perhaps a couple of metres away.  With more testosterone than a bull elephant, bull sharks are known to be unpredictable ambush predators.  My heart was in my mouth! As soon as I turned towards it, it flashed its white belly at me and dived to take out a fish.  What a rush! 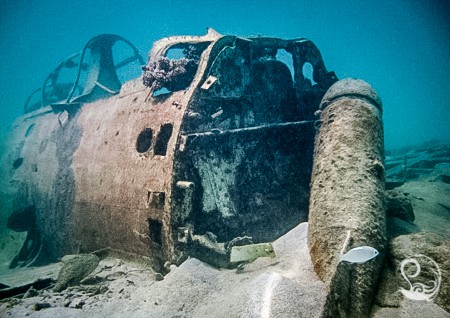 There are many other beautiful dives in Palau, and I haven’t even touched on the wrecks or technical diving.  I will explore those in the next edition of the Soulwater blog.  Needless to say, Palau has a very special place in my heart, and offers some of the most beautiful and exciting diving I have ever done.

There is so much of my adopted home of Indonesia that I have not yet seen, that it has to be first on my list, and there is probably enough spectacular diving here to keep me busy for a lifetime.  But also on my diving bucket list are, not necessarily in this order and not limited to… PNG, French Polynesia, the Philippines, the Maldives, the Socorros, Bimini, Mexico, the Red Sea, Galapagos, South Africa, Malpelo, Cocos Island, the Solomon Islands, and of course the Poor Knights in New Zealand….

The point is, although I have had incredible experiences diving all over the world, there is still so much more to explore, and I will never get tired of diving or lose my passion for discovering the joys of the ocean. 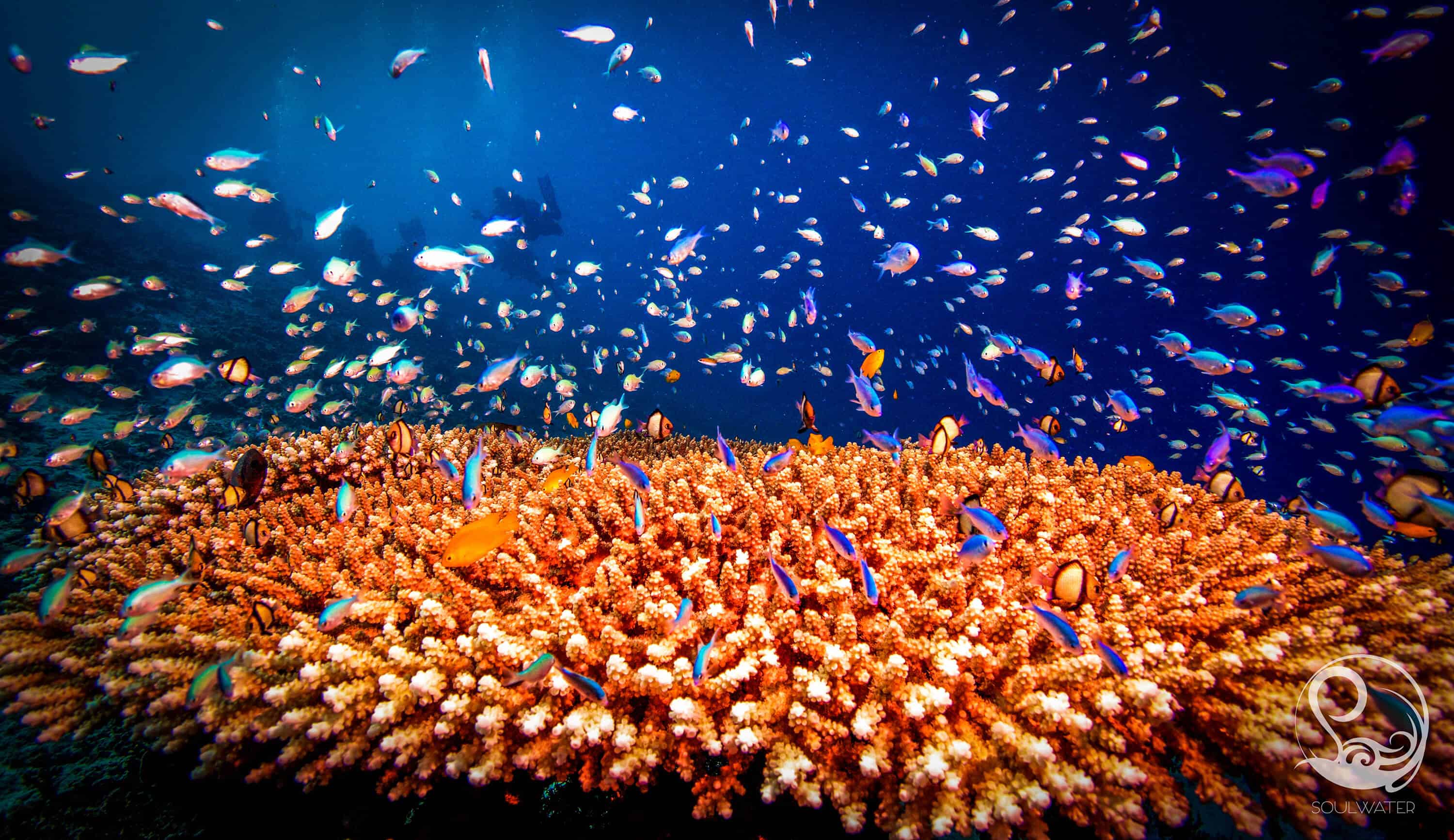 Credit where it's due!

Thanks to Richard Brooks for the great drone image of Blue Corner and the Sea Bream at Peleliu you see above!  Check out his work at the link below.